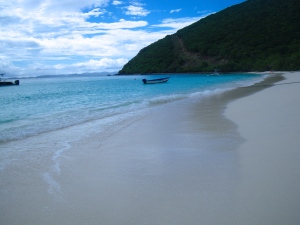 Every wave has an undertow. Bodies of water breathe. When the sea exhales waves break and spew phlegm onto beaches. Oceans meet land and release energy in the spirit of a Zen master. Water wants only to flow. When freed from the sea it stretches until its forward energy is depleted. It is recaptured and commanded to retreat or be evaporated by the sun. Undertows form currents that lick low and slink steadily towards offshore. Undertows suck sand away from one’s feet. They extend silky invitations to follow into deeper water and relish pleasures secreted deep beyond the surf zone.

Undertows are unsettling. They aren’t dangerous like rip currents that highjack swimmers and hold them hostage until they sink beneath frothing waves. Rips are wicked – life threatening, maritime thugs who snatch breathless, unsuspecting swimmers into the darkness below sun dappled waves.  Undertows are temptations -like people who pull others into situations beyond their comfort zones.

Surf line far from a shore that was underwater just a couple of hours earlier. Narragansett RI

Rogue waves are worse than rips. Twenty years ago we went to the America’s Cups races in San Diego. It was early February when the Pacific coastal waters boast of enormous, rough and unpredictable wave action. We went beach walking on a blustery afternoon. The surf was frigid, confused, and angry. Wave crests towered above the pier  and roared louder than a herd of jet engines. We stayed far from the waterline away from the breakers’ icy spray. Wind burned and chilled, I turned my back on the sea and headed further up shore. A silent wall of water broached my reverie. It slipped ahead of my feet its force buckled my knees and knocked me face forward beneath the surface. Startled, legs akimbo, arms flailing, sand and water penetrated every orifice. 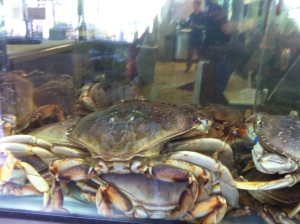 What lies beneath the undertow?

The water disappeared as mysteriously as it had overtaken me -swiftly and silently. I retched salt water, spit out gritty sand, raked seaweed from my hair, and snorted gray foam. People higher up the beach described a monster wave that broke and pushed a surge of deep water far up the beach before sucking everything into its clutch.

Never turn your back to the ocean. We were lucky – later that week, the coach of the Chargers’ daughter was not. She and her brother were out on the coastal rocks scattering their Mom’s ashes when a rogue struck them off guard and dragged her soul to eternity.

Maybe maturity is staying clear of rips and rogues whose company is worse than being alone. It’s only a beach if there is water. I don’t mind being tempted beyond my comfort zone – that’s where adventures are born and wonder is raised. Like the sea; breathe out, breathe in – it’s not a beach vacation until you get wet.