Whether you believe in climate change or not – I find it odd that I’m spending President’s Weekend (3rd weekend of February) boating on the Mississippi. It’s peculiar because for the past quarter century our merry band of friends, offspring, and their springs have spent this particular weekend skiing down the bluffs of the upper Mississippi. That’s downhill, snow skiing where we reveled in temperatures just shy of 30° F. We played outside all day and it felt good to be cold.

Generally, people don’t succumb to winter kill. Bad ankles and metallic knees force a lot of Boomers to set their ski gear out in spring garage sales. Aging and the ravaging effects of disease take folks off the river. Some of those diseases are brought on by the sloth-like 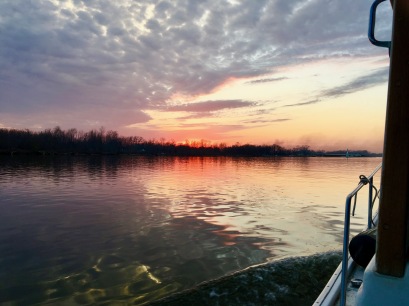 Wouldn’t it be nice if all social media were this peaceful?

tendency of people living North of 35° latitude to hibernate during the winter months. The most exercise they get is getting up for snacks during Netflix binges. Post holiday sales blitzes mark down Eddie Bauer and North Face outerwear to at least 60% off MRSP. There aren’t a whole lot of reasons to stay inside. Our closets are stuffed with jackets from the clearance sales of winters past. Pick one and get outside.

The high here today in St. Louis is expected to top 70°. We’re headed back to the river to tend to our sailboat, Ex Libris. There’s nothing we have to do – she’s been decommissioned for the winter and is tethered safely to the dock. We’re restless because Mother Nature is teasing us. Or perhaps, she’s sending forth a not so subtle warning. If it’s this warm mid-winter – imagine the blazing inferno of July.

There are a lot of dead carp decomposing on the river this weekend. Typical for this time of year – much like the winter kill of too much inside screen time. Get on out – it’ll do you good.