Imagine doing something just for the sake of doing it. You’re in the zone. You are going with the flow. Time fades and your entire being gets into whatever it is you are doing. The moment is prized and you hardly notice that your body and mind are stretched to their limits. The flow is you. 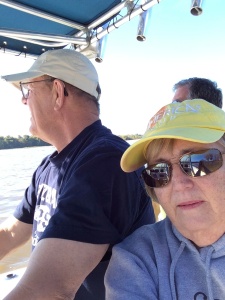 DW’s idea of a river dance. Port Charles to AYI.

Saturday I hitched a ride up river on our friend DW’s power boat. I arrived at the harbor and found him on the dock, relaxed as he savored a hot tumbler of coffee. When I apologized for being a couple of minutes late he grinned, “We’re on River Time.”

His 24’ Cobia stirred up a mess of Chinese carp before pointing upstream, getting down on plane and ripping through the current. The shoreline was ablaze with orange, crimson, and golden foliage. The channel shined beneath the low-slung sun as a purloined trove of Cartier’s finest diamonds.

Time like a river flows. Boats allow us to flow with time in ways that can’t be measured by Rolexes. Watching a bald eagle soar above the river for just a few moments is a vision that can endure in memory over a lifetime. Being with the flow resets our heads to moments in life when age is irrelevant. Age is trumped by the joyful sensation of being alive. The past is left in our wake the future lies at the bow. We float with Now. Regardless of the number of candles on the last cake – being on the water resets our internal sense of time. We are forever young.

Our cruise back to port was brief as the boat bit into the groove and sped down the channel. My mind absorbed the crisp fall air, glare of the sun, and brilliant foliage reflected off the calmer waters. My knees flexed to absorb the shock of crossing over wakes. Crows dug their feet into the creases of my eyes and lips as I squinted and grinned into the wind. Water, land, wind, and sun were transformed into a memory that will last longer then the time yet to pass between laying up for winter and next year’s boating season.

Rivers, lakes, and oceans have some places where the water is deep and others that aren’t. Boaters put a premium on knowing the difference. When the bottom unexpectedly meets a hull the results can be catastrophic, so boaters seek water that’s relatively deep. Novice swimmers (regardless of their height) tend to do the opposite and feel more secure when they can touch bottom.

We can get into real trouble in water whether it’s over our heads or beneath the keel and propeller. Depths vary between the spots where water kisses dry land and the deep abyss where living things take it upon themselves to light their way.

People are not just made mostly of water – they tend to act like deep or shallow ends. We all know at least one philosopher savant who makes simple things complex and often drowns us with details ad nauseam. We grow exhausted fighting the current of drawn out discussions that appear to have little meaning to anyone past the first drink and no end in sight. Then there are our easy breezy pals who never dive deep into any conversation. These easy chatters bring a light chop to dialogue that carries us through the next round. Somewhere in between are the acquaintances that are much like uncharted waters. We’re not sure whether their cups are half full or empty – and don’t really care. Not knowing the details makes navigating some relationships really interesting.

I know people who think, “I’m really not all that deep – what you see is what you get.” That’s a misleading statement. You can’t always tell what lies beneath by what the surface looks like. This season the river has gone from flood (more than12’ feet below our boat in the harbor slip) to the lowest levels (3’9” beneath us on Saturday) many of us have ever seen. Take for example the Mississippi River last weekend. We set sail on our friend’s sailboat, Mariah. As we prepared to leave the dock, numerous sailors warned that there was less than a yard of water at the mouth of the harbor. Our skipper affirmed that he had a retractable centerboard and we’d only draw about two feet of water beneath the hull. Sure enough – out we went into the river channel.

It was a beautiful day for sailing – steady 10 knot winds from the north. We headed back with big grins and wary eyes ahead looking out for the rock dam that extends from the Lady of the River across the slough (a skinny channel set apart from the main river by a series of islands). We knew almost exactly what lied beneath – but not how far the lie went. The golden autumn sun was setting low in perfect alignment with the slough and the wind was at our bow. We had to squint to read the current as it swirled the energized, dancing waves in a chaotic rhythm. We saw the line of whirlpools and white caps that signaled shallow depths – but the river unexpectedly went shallow under quieter water. With a sickening series of thuds the centerboard rammed the dam and had a rocky ride over its crest.

Bent centerboards don’t retract back into their kangaroo pockets beneath the hull. A harbor mouth that was “deep enough” a couple hours earlier – was a greedy sucker that swallowed the centerboard and held the boat solid in it’s jaws. We were stuck. Drama ensued with a tow by the harbor master, sheepish nods to the naysayers who warned us to stay tucked in our slips, and a certain sense of satisfaction that we really did have a great sail while everyone else busied themselves ashore. Rather than wreck the day with deep analysis of what went wrong – we all sort of shallowed up. Our small community offered to help fix the boat and get the skipper back on the water ASAP.

Of course – the river’s going to have to rise up and lift Mariah off the bottom. Then our conversation will be deep enough to be interesting and shallow to the extent we keep our mood afloat. 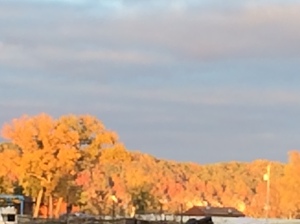