The 4th of July reminds me of Nantucketeers rounding the Horn (southernmost tip of South America) on their way to the Pacific whaling grounds. Passage from the chilly spring rains to the summer inferno can be rough weather-wise. We’ve endured Mississippi River floods, been scorched by heat waves everywhere south of the Canadian border, tested by intermittent squalls blasting eastward down the NY Thruway, and depressed by June gloom that shrouds California and New England’s coastlines. Once you round the Horn, the forecast is optimistic. Unless you recall Herman Mehlville’s inspiration, the whale ship, Essex. It broke free from a horrific passage round the Horn where the crew was endlessly pummeled by icy gales as they careened through mountainous swells and swallowed vicious headwinds. The Essex’s survival was brief. The crew were busy the middle of the balmy Pacific harpooning a pod  when the schooner was abruptly rammed broadside and sunk by an albino sperm whale.

I’m relaxing alongshore on Narragansett Bay, musing about the six degrees of separation between truly great Americans and myself. My summertime neighbors gather during pleasant midweek evenings under the moniker of the “Wild Women of Wednesdays and Wine.” We often chat about our personal passages from youth to a “certain age.” This week we name-dropped famous people we’d met who truly made a difference in America.

First up was Sheila, who as a young child was a communicant at the Newport church attended by the Bouvier family. On a balmy fall morning in 1953, Sheila stood on tiptoes outside the doors of St. Mary’s Catholic Church. The bride and groom, Jack and Jackie Kennedy brushed pass her and waved. Years later she shook the presidential candidate’s hand. Over a decade after that, miles from Newport’s Cliff Walk, the epicenter of high society, Sheila met Martin Luther King. MLK’s impact? The white glove luncheons of southern Naval officers’ wives were far right from the Freedom Riders, Sheila shed her gloves and challenged racism by registering voters in Montgomery, Alabama.

Deb spoke of the excitement she felt as a child when she saw President Harry Truman, and much later, as an adult, saw Pope John Paul II in St. Louis. Truman had left office by then and the buck stopped in Missouri. The Pope Mobile sped by Deb at breakneck speed as the pontiff serenely blessed the crowds and prayed for world peace.

I offered up seeing Neil Diamond who gave us songs that most of us could remember almost all of the lyrics. They weren’t impressed since Neil’s been constantly touring since the 60’s. It’s harder to find someone our age who hadn’t seen him in concert than those who had.

We agreed, JFK, MLK, and Harry before Potter are icons that symbolize American ideals. They’d earned recognition and respect that has endured over time. As for the Pope, he earned sainthood though his words and actions.

We’re at a time where for some people, realizing Diamond’s hit, Coming to America is as difficult as rounding the Horn on a Nantucket whaler. Today we bought a new flag to hang out front for Independence Day. It’s the same flag my Uncle wore on his Naval uniform when he flew as crew in a B24 over the Pacific for one last time during WWII. It’s the same stars and stripes Puerto Rico flies. It is flown over the Freedom Tower, Newport, St. Louis, and Montgomery. To be a citizen in any state is not just a good thing, it’s great. Paul Revere and John Paul Jones knew there was no free ticket to Independence. Let’s honor heroes past and present by only saying things about our fellow Americans that are appropriate to say in front of young children. Try to be civil and proud — at least until after the 4th of July. 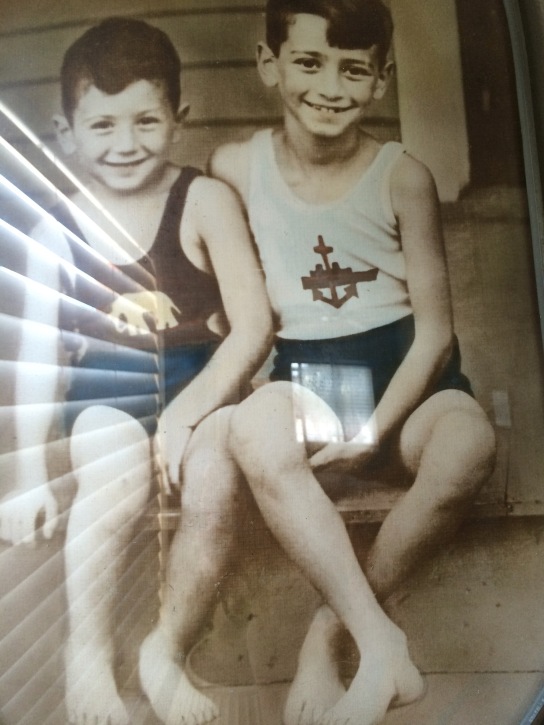 Pop (left) and his Big Brother Francis (USN): My Heros