The general theme of this blog is Apophenia Afloat.  Apophenia in a sense is about chaos – no matter how random events, places, things, people seem on the surface – in some weird way we can find patterns that connect everything to everything. Okay, technically, the connections really don’t exist except in a creative way of looking at the world. Humans like to connect the dots and the dots have nothing to say about being connected. And no, this blog is not about seeing Jesus’ face on the french toast – don’t take the combination of dots literally.

Do you see a pattern? Depends on how you look at them. Try this – lay them out horizontally

and we’ve got a pattern, a cliche among the sly emoticons that flood text messages. 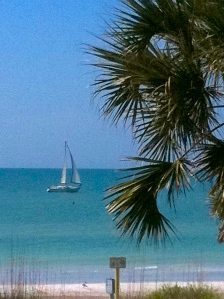 Most of us think about the sea while firmly tethered to land. I like to think  on the water. I like to think afloat better than on my feet, and better than when taking a shower. I guess I’ve got soggy thoughts sailing around my Sea of Cognition. Lot’s of my thinking has to do with boats, sailing, beaches, stars, wind (are you starting to sense a pattern here?), enjoying the playful side of life while at the same time being mindful that most stuff means something. Before you can assemble a pattern its important to pay attention to what’s happening right now. Focusing on what is now is called mindfulness – it’s a zero caloric way to feed your head. A moment is connected to the past and future but is distinct as a single element of time.

Some of my posts play with words – multisyllabic words – big words – and words that can mean many different things depending on the other words that they are hanging out with at the moment. The stuff we know – memories – prior knowledge – that’s what creates meaning from print during the incredibly complex cognitive activity known as reading. So, in the spirit of apophenia – whatever you read on my blog is instantly reconstituted by your brain – especially the neurons holding memories of your past that I don’t have any way of knowing a thing about – and transformed into something fresh with a unique meaning that becomes part of you. 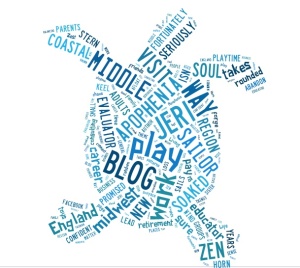 Apophenia of the words used to summarize this blog.

And suddenly, your brain and my brain are no longer random riders on planet Earth as it circles the sun – we’re connected in a very creative way. It’s not a Vulcan mind meld from Star Trek – it is part of the wonder that makes us human. We share moments even though we may be separated by time and space. And even when one of us quits – there’s still something left in the other’s brain that keeps us together in a weird way.

One thought on “What’s Aboard?”