Regardless of what college or university claimed you after high school – proof of study was found in the “Freshman 15” pounds of excess ballast packed on during that first year away from Mom’s home cooking. The lure of unlimited helpings, highly salted carbs “on demand” coupled with bottomless mugs of “adult beverages” trump any resolve maintain a healthy diet. I fondly remember how Coney Dogs sloshed around my gut. These boiled hotdogs were smothered in chili, mustard, onions and pickles nestled within a steamy bun – 3 for a buck – and inhaled after frat parties. This was being real adults, “to eat whenever we want”, I’d slur to my friends – who wondered why they had a wicked headache and were a dollar short the next day. 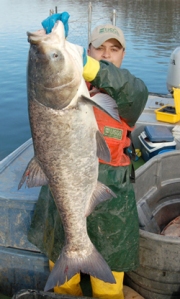 Boaters on the Mississippi River despise invasive, ugly, nasty Asian carp that launch unexpectedly high out of the water and crash on deck in a mess of slime and bloody guts. Carp are disruptive, annoying and in most people’s opinions – tasteless. Asian carp are like college freshman – they are voracious eaters with minimal sense of dining etiquette. Upper classmen avoid them unless they are saturated with “too much too too” at which point they are fair game for things you never write home about.

Like carp, freshmen leave little behind except a messy, undernourished environment. Saturated with copious amounts of booze over time, college students ineptly face the stress of incomplete assignments, the subsequent threat of flunking out and fear having to move back home. These moments of rational thought heighten freshmen’s anxiety and slam their hunger into hyper drive. Stressed students eat a lot of just about anything – including, the newest addition to dining halls at the University of the Show Me State – Asian Carp. 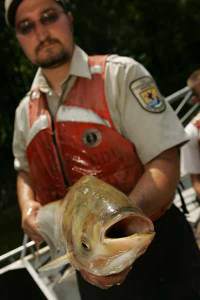 Geologist or Culinary Staff? Who cares! Soup’s On! Photo US Geo Survey

Show Me students have given two thumbs up to fish entrees disguised beneath international hallmarks of fine eating such as; Pasta Putenesca (“best with vodka” quipped a coed), Mexican Jalepeño fish soup (“okay smothered with tortilla chips – gets rid of that Jose Cuervo after-taste from the night before”), and the top Sunday favorite, carp simmered in gallons of Italian gravy over a pile of pasta (“tastes like meat balls” garbled a sleepy undergrad). “Don’t assume it is fish”, a student advised – “except for the leafy stuff – only Bio majors know what’s in anything on the menu – and they eat here – so chill.”

Feed the Tigers – carp! C’mon guys – eat lots and lots – pay it forward – they’ll fit right into your Freshman 15 and never be missed by Mississippi River Rats. Remind rival SEC athletes that you are what you eat – then show them a picture of lunch. Go Mizzou! 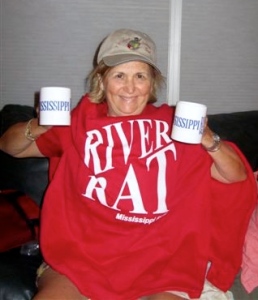 Distinguished UM (SL) Alum who’s a Triton not a Tiger