Fall winds bring sailors out to frolic on the Alton Pool of the Mississippi River. Small powerboats have been cast aside as soccer moms, the NFL, and the Cardinals’ boys of summer command summer boaters’ weekends. Hearty sailors who laid low during the spring into summer floods, when summer breezes that barely misted a mirror thus declaring sailing about dead, greet autumn with zeal.

There’s an adage in southern New England to beware of crazed Mainers Down East in the early spring because they’re all crazy with cabin fever. River folk take notice – sailors assume the persona of an Indy 500 driver who spent the final weeks of summer in Jamaica. Fall brings forth their need for speed as they trim the mainsail to capture the winds, fill balloons and canons with water, and fill their holds with fermented libations to enhance yarns told ‘round harbor bonfires. They become Mississippi River Pirates. 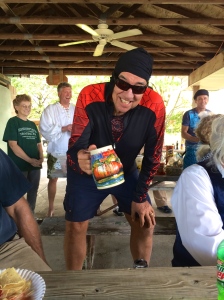 Best or Most Not Johnny Depp Pirate Costume Winner – A Simple Man.

MRPs are the polar opposites of those not deserving of the moniker “pirates” who hail from east African ports. They amuse rather than terrorize other vessels. The only booty they ever plunder tends to be legitimately purchased and paid for with VISA cards. Their wenches are often captains or majority shareowners of the boats and comfortable bunkmates for decades. While they consider most rules to be “guidelines” – they’d never arrive unannounced in a cockpit – they always ask permission to come aboard. They flat out do not take hostages – most secretly revel in their empty land nests and note that while the Captain will sail safely with six to 10 passengers and crew – and may well have berths to accommodate 6 – the boat ONLY sleeps two.

Some people fall into a mild depression as the days grow shorter, trees shed, grasses dry up and daily highs mean its too chilly for flip flops but just right for donning cords and sweats. These sad souls think the third season is a precursor to the third and final act of the dramatic play, Life Span. Snap out of it – some never live beyond a day and some wish they’d been dead for years. Life is at once a tragedy and comedy with plot lines crisscrossing pleasure and pain, starring the characters Joy and Sorrow, set in rain and sunshine with a mysterious theme. Heed the wisdom of the philosopher Horace and the fictitious teacher John Keating – Carpe Diem – Make Your Lives Extraordinary. It’s not just the events of a day that create memories to carry us through the year but our perception of the meaning of those happenings that silence or give voice to our power to sing – “It’s been a really great day.” 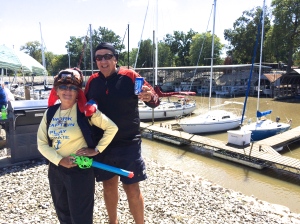