Typical of vaykays in general, I can tell you with confidence that we leave in 5 days but I’m not sure how many days it’s been since leaving home. It’s more important to be with the moment right now. It is a splendid morning on Indian Rocks Beach.

We’ve been busy whispering around the Masters Tournament, playing 18 holes, watching the Gulf turn from an angry gray tousled sea to a brilliant aquamarine infinity pool. We’ve gawked at two beach weddings, swayed to the rhythm of steel drums, and cheered an aging Amazon rocker belting out “I love Big Beer Bellied Boys” at Crabby Bills. 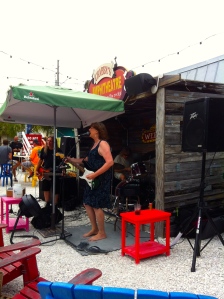 Mama’s Got A Squeeze Box

She, the rocker not the bride, was at least 6 feet tall in flip-flops and played the guitar like Carlos Santana. She is one of the last of the true rockers that knows all of the riffs by heart. The Sunday crowd of ex-pats, rednecks, and last of the Canadian snowbirds blasted back the band’s energy with whistles, whoops, and cheers. I met Crabby Bill who despite his moniker was gracious enough to be photographed with me. He’s not at the celebrity status level of Colonel Harlan Sanders or Ray Kroc but they’re dead and Bill’s not quite.

Saturday I endured another annual meeting of the Nest. The four owners are all suffering with a degree of Post Traumatic Stress Syndrome.  Half way through the mayhem I experienced early onset Tourette or Parkinson’s – I was trying so avidly to moderate the screaming and restore order that my amygdala sprang a leak. My neck and shoulders were stiff and sore yesterday. Keeping calm and carrying on was on par with Atlas deciding whether to shrug or bear the weight of the world. We played golf Sunday morning and the worst after effect was that my hands still shook when setting the ball on the tee. It took eight holes to end the perseveration with bad ju ju from our meeting. I know exactly when the PTS ended – the ninth hole when Bonnie and I scored a 2 for another Birdie. I became mindful of the moment and the stress of the past instantly dissipated.

It would be much nicer if all of the Nest owners could all get along as well as our dogs. Newport, Copper and Marina play tag, slobber and tussle, hunt geckos, and sniff each other’s butts with great zeal. They know when to call it quits and nap in the shade. They play nice. They don’t expect the same level of commitment as the brides who walk confidently towards their grooms waiting by the water line.  They don’t pledge each other a lifetime of loving care. Dogs just want to play with each other and then take their masters home for the night. If only owning the Nest was a dog’s life.

A Dog’s Life is Good