Finn is bobbing on the outgoing tide, her docklines are taught and straining to be free. She is unaware that when the wish is granted – the lines will be coiled and hung from a hook, her hull cradled by a metal berth, the topsides shrouded beneath a royal blue tarp. She will be separated from the sea and her crew, tucked away in the backyard for three long seasons. It’s time to swallow the anchor and retire from our seaside hamlet for another year. We are returning to our home midway downstream of North America’s greatest drainage system and leaving behind a narrow estuary with a mere seven mile flow from source to sea. Should we enjoy the continued blessings of health and prosperity we will return in a year.

The rivers flowing today will be long gone when we return. The water between the banks will have found its place in the sea or have joined the clouds in the sky. New waters will bubble up through the ground and fall from the sky as Nature invests in the flow between the banks. It is a small tribute to the anxiety that rides lightly astride my aging process that a humble prayer runs through my soul – a petition for good health and sharp wits to remain with those I love during the upcoming circle around the sun.

My worries concerning as yet unknown events that will transpire during Finn’s hibernation blossom from a seed planted a exactly a year ago when two ships passed in the night. Longfellow would explain that time laid its hand upon our dear friend’s heart, “gently, not smiting it”. It was as a “harper placing his hand upon his harp, to deaden it’s vibrations.” And so it was. The music ended yet the deafening quiet that followed his finale blares loud in my memory. While Peter’s heart was stilled, over the following two days his spirit briefly soared close to shore. We are certain that it heard the first cries of his newborn grandchild.  And so it was, that a mere year ago, “on the oceans of life” a grandfather and a newborn passed and  spoke to one another, then sailed into the night. Today the child’s heart vibrates with youthful zeal. She laughs to the beat of clapping hands as the family sings to her loudly and off key in celebration of her first birthday.

Today our family is reminded, by Longfellow’s verse, that, “God sent his singers upon the earth, With songs of sadness and of mirth, That they might touch the hearts of men, and bring them back to heaven again.” We are charged, as God’s earthly singers, to be in tune with the angels by sharing our grief and joy, fear and hope whenever we mourn a loss and celebrate a new life. “So on the oceans of life – we pass and speak to one another.”

On these tender days of August, for the rest of my earthly tenure, “My soul (will be) full of longing,  For the secret of the Sea,  And the heart of the great ocean , Sends a thrilling pulse through me.”  Sail on through the heavens, dear Peter. Oh! What grand adventures lie before your bow, dear Maggie, as you captain your own vessel upon the stream for many, many circumnavigations around the sun. 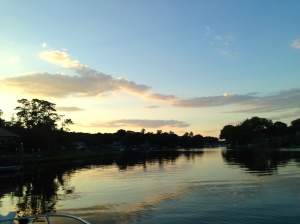 Upstream or downstream? Depends on from where you look

Quotations from Henry Wadsworth Longfellow’s poems, Ships the Pass in the Night, The Golden Legend, The Singers, and Secrets of the Sea.