Summer has come of age and does not look, smell or feel as fresh as late spring in early June. August might feel more “thirtysomething” if the Romans hadn’t decided to switch over the calendar because it was originally called Sextilis. Personally, the name change probably had something to do with aging Roman power brokers deciding it was too hot for sex during these blistering nights. Caesar Augustus decided that the eighth calendar month was to be his namesake so he stole a day from February and extended August to 31 insipid days.

Like the rule of Emperor Augustus, things that happen in August have far-reaching influence. Caesar Augustus gave the world an era of peace, a solid economy, great writers, and better harbors. The harbors make me question his fear of unknown currents just beyond the breakwater. Maybe he wasn’t a sailor because we sailor know boats aren’t built to stay docked in safe harbors. The beauty of sailing lies beyond the shore.

I can relate to Caesar during these dog days of August living by the seashore. It is time to cut to the chase, savor waning UV rays, scrunch sand between toes, and float without a boat downstream. 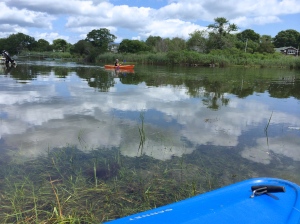 Connie Paddling = go with the flow.

Warm water also brings forth jellyfish and crowds to the beach. Locals don’t embrace either – especially the jellies. Imagine swimming with clear umbrellas of snot floating along. Jellies are safe because as Augustus believed, this month is a time for peace not war. Nobody fishes the jellyfish; they’re neither edible nor useful as bait, and they make lousy pets.

The sun is more lenient about clouds than in July and allows tall puffy mountains to build in the afternoon sky. The sun is taking his time rising and seems eager to give way to dusk. When he lazily reclines on his Barcalounger on the horizon the seawater turns liquid silver and gives up its color to the stars well before eight o’clock. This week’s super moon is looms large and clear, it’s craters unmarred by ozone haze in an ebony sky encrusted with sparkling stars.

Augustus must’ve had some hormonal imbalance to relate to this month. Many nights in early August are sticky, still and stifling. Sweat drips, sheets cling, towels must. Within the week along comes a polar blast to chill the evenings. We dig out sweats and extra blankets. We savor these nights of dreamless sleep that void memories of steamy pillow-tossed nights.

The season is turning like the tide. I sense changes in the taste of the wind, the sounds of the bugs and the smells of the night. Taking hints from the geese, I know the time to migrate west is nearing. Summer is losing ground and it’s getting to be time to greet Autumn.